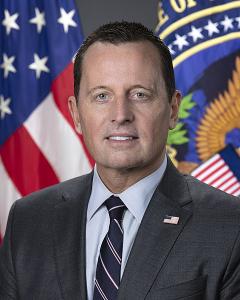 WASHINGTON, DC, UNITED STATES, November 23, 2021 /EINPresswire.com/ — During the meeting on November 18, Ambassador Grenell began by thanking the American Mideast Coalition of Democracy for being a voice for the Iranian people. He lamented that several times since 1979, the people have risen up only to be crushed by the regime. He has pushed for decriminalization of homosexuality in Iran and has worked to help many of those people escape the regime.

Question: We know that Obama did nothing to help the Green Revolution, but when Trump was in office, why was there not more action taken against Hezbollah?

Ambassador Grenell: I thought we squeezed Hezbollah quite a bit. The Europeans pushed back very hard against sanctions on Hezbollah, especially France, who were worried sanctions would harm the people of Lebanon. Germany (where Grenell was US Ambassador) finally stepped away from the EU and designated Hezbollah a terrorist organization. That was a big breakthrough, but until France comes along, there will be no sanctions on the part of the EU. Trump wanted to be tougher, but in this case, we have to coordinate with our allies or it won't work

Question: During the Trump administration, we saw a lot of good action, but we wanted more. We want to oppose the Islamist hateful ideology and we are looking for a seat at the table.

Ambassador Grenell: You must understand how strong the pushback was on ending the Iran deal. The Europeans and the Democrats all thought it was needlessly belligerent. And furthermore, since the Iran regime is not rational, until the regime itself is broken, no policy will be truly effective. Our ambassadors were all under instruction to deny Iran funding everywhere.

Question: Many Iranians with ties to the Islamic Regime, including 2500 regime cronies who got U.S Green Cards as part of the Iran Nuclear Agreement come freely to the US for education, health care and other benefits. Some are active in undermining the US from the inside. How can this be stopped?

Ambassador Grenell: While working at the UN, I observed many such individuals who expressed open hatred toward the US and yet lived the good life here. If they had children, they were citizens with full rights and privileges. We need to re-think these policies.

Question: The Iranian people are under tremendous pressure, especially in places like Infahan where they don't have water and when they rise-up, the regime cuts off the internet, so the outside world cannot see their repression. Can we block their internet blockers?

Ambassador Grenell: I have worked since 2021 to utilize technology that would give free access to the internet. Most Americans want to help, but don't know what to do. We need help getting vulnerable people out and we need safe houses in third countries like Turkey where they can stay.

Question: If the US is neutral, Russia and China will move in and take over. We need media support for the Iranians here.

Ambassador Grenell: The media won't help; we need to be able to bypass the media – that's why keeping the internet open is crucial.

Question: Why wasn't the Muslim Brotherhood designated a terrorist organization during the last administration?

Ambassador Grenell: That was a mistaken policy and won't happen again.

Question: Hezbollah is also a drug cartel involved in drug smuggling over here.

Ambassador Grenell: Once again, I raised that issue with the French. They are concerned about harming the people and so won't crack down on Hezbollah. France allows Hezbollah to utilize their banking system. France is the reason the EU wouldn't support banning Hezbollah even after Germany did so.

Question: The U.S. Military did a great job against ISIS and helped save the Yazidi community. Couldn't we do something similar with Iran?

Ambassador Grenell: I am a diplomat and only deal with diplomatic solutions. The military is not my area.

Question: There is also the problem of Iranian-American husbands taking their American children to Iran and divorcing their mothers there to receive full custody.

Ambassador Grenell: Yes this is a real problem that needs to be addressed.

Question: We need to point out that the poverty level in Lebanon is where it was during WWI. The people are suffering under the brutal hand of Hezbollah.

Ambassador Grenell: We hope that during the next Republican administration, something can be done.