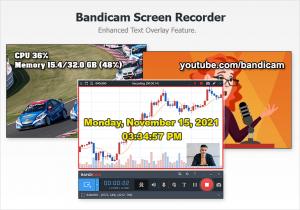 Bandicam has released the latest version of their app with more improvements. In addition, several time stamp information can now be displayed.

IRVINE, CA, UNITED STATES, November 23, 2021 /EINPresswire.com/ — Bandicam is a popular screen recording software that has found extensive use in several fields. The company has just announced that they have made enhancements and improvements to their products.

Several new features have been incorporated, with Bandicam now being able to display information, such as recording date and time, memory usage, video resolution, lapsed time, and more.

One of the key spokesmen for the company stated, “Bandicam makes it a point to constantly update available features because we believe that feedback should be incorporated. Whenever users tell us about the features they would like to see, our team works on it and decides what to do about it.”

Those who will be using the Bandicam screen recorder feature for making presentations and tutorials will now be able to add information, such as the creator of the video or text overlays, to their videos. Details like these are some of the best ways through which users will be able to enjoy their final creation.

The software is one of the very best in the market at the moment. It is likely to help people record streaming videos, zoom meetings, take screen grabs, and do a whole lot more. Recorded videos will now be laden with details pertaining to the creator, with information as such being useful for future purposes.

The developers of the software are very upbeat about the response they have been getting from users, and they want to continue adding more features and enhancements. With the addition of various enhancements, the developers are sure to keep users happy with the product.

About Bandicam Screen Recorder
Bandicam is one of the most popular screen recording software that comes with amazing features. It helps take seamless recordings and captures the best of information. The company makes it a point to incorporate a diverse spectrum of features.